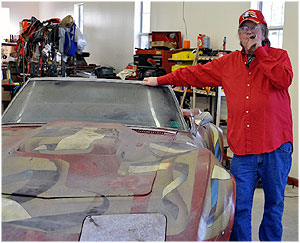 Bounty Hunter, n, origin: 1930, (1) one who tracks down and captures outlaws for whom a reward is offered, (2) one who hunts predatory animals for the reward offered, (3) one who hunts the timid and slow; takes their money; trades-up when beat and will shoot back, see also, Ronnie JoynerRonnie Joyner: "Born on a tobacco farm in Mt. Airy North Carolina raised on pumpkins and sweet potatoes."

Ronnie quotes:
- I come wide open [referring to how he first drove the L88 off the rail car]
- Alcohol got this paint job.
- I tell it like I know it
- passed it like it was tied [referring to the race with the Cobra on the airstrip and his last race with the motorcycle]
- King of the mountain [referring to the L88]
- you don't let nobody drive your L88 [except his wife and the fella who drive it up on the sand dune]
- Never saw a Wells-Fargo Truck follow a hearse. [Ronnie's way of saying, you can't take it with you]

Anybody who ever wanted to race it got their chance; if they couldn't come to him, he went to them.

A race notable for the fact it didn't happen and for its gun play. It ended with Ronnie getting shot. There was no race. He'd gotten shot in the foot. The driver's side door and windshield took the brunt of the buckshot but the Martinsville story didn't end there. "I went on and shot him back... make sure that gets in there."

Ain't nobody who pulled up along side this car, including motorcycles ever outrun it.

This [Corvette] is a bad "hammin knocker"

A representative came to the car hauling company who knew where these cars [L88's] were going to go. He an Ronnie were real good friends. Ronnie had fixed him up "girlfriends" on his route once a month. In trade for Ronnie's kindness and attention, Ronnie got the L88.

Ronnie pre-ordered the L88 and traded in his 1967. He purchased the car from Modern Chevrolet in Winston Salem, NC. Ronnie was without a Corvette until his 1968 L88 arrived. It was two months into the 1969 Corvette production when the L88 finally came in by rail. Ronnie off loaded the Red L88 off the train himself. "When I come off that train track, them boys said, 'you could see up underneath of it.' I come wide open. Tires were a'smokin'. It hit the ground a'runnin'. Been wide open ever since. 30,000 some miles on it and they were all wide open racin'."

Most of the racing done with this car was on the street. Most Ronnie ever won was $2,500.00 against a guy who owned the Corvette shop in Winston-Salem.

He did have a race up in virginia with $5,000.00 on the table. Refused to race and they shot me and the car. "That's okay, I shot him back. Payback's is hell." [see Martinsville Virginia]

The car was a solid red. "This is a drunk paint job that me and another drunk designed. One of a kind and looked good, back in the day. When you was drunk. It looked really good. Alcohol got this paint job."

Ronnie had had the car for two years or more when they put the "crazy paint job" and added the fender flares. The flares were for the big Goodyear racing tires like NASCAR were running. "I got all the tires I wanted from Jr. Johnson's garage."

Ronnie's hang out was a little bar called the Hitchin' Post. He was drunk and the driver was drunk. His friend turned the L88 into the driveway and got the car jacked-up on a sand dune. Ronnie took over at that point because his designated driver "couldn't drive no how".

Ronnie put the car in low gear and left it there until the clutch exploded. Divine providence sent most of the clutch down instead of up through the firewall because, "It would've blowed my feet off but that was the last time I drove. Right after that, I quit drinkin' so I never got it running again. I was so drunk the next morning I'd wondered where my car went... and then I seen it out there in the sand buried up."

Ronnie built his current garage to restore the L88. He even hired two different guys who started the restoration but they both quit. Ronnie realizes that if they'd have completed the restoration, he would have had just another car. Now he knows it will get the attention it deserves. ProTeam will restored and restore it the right way.

This old car has a lot of history behind it.

"Everyday if I could find a race. I started to have to go out of town. I done outrun everything within 30-40 miles of where I lived and on the way to Myrtle Beach, South Carolina to the motorcycle rally, we stopped there to see if anyone had anything they thought they could run. We'd take their money and go onto the motorcycle rally and spend their money. On that trip we got there and back on nothin' I belonged to a motorcycle club called the Jokers and had about 40 bikers following me pulling my Harley behind my Corvette and those damned people was sure gonna pay. Take a look at that crazy bunch and they gave me money. Wanted to drag in the dirt down there [Myrtle Beach]."

question: Which gave you the best run?

answer: "Another L88." This was in Winston-Salem another guy had an L88. It was close but I believe I was a little better driver than he was and I had better tires than he had."

"And another good story to tell. Me and Zack Reynolds were friends. he had a ford cobra. His family owned the Smith reynolds airport in Winston-Salem. They detoured the planes landing and taking off long enough for me an Zack Reynolds to race on the airstrip and I outrun that Ford Corba like it was tied. It wasn't for money. He wasn't a bettin' man. He carried no money. You had to buy him a damned cocoa."

"I always had a convoy. 'clan' is what they called it. They went with me wherever we raced." They got paid if he won. [The clan were 30-40 motorcycles who were following him in a convoy behind his L88 (or a group of guys he hung with) that was hauling his own Harley. People would always pay-up when they lost.]

Ronnie raced two miles. Blow the horn to start (the other guy got to blow their horn). Always a starting/finishing point, ie: bridge to bridge, etc.

"This car ran fast. Blowed the new top off of it. Had two more put on it and it blowed them off. Weren't nothing left but the rails."

"Never launched good that's why I never came out of hole I always kept it moving. At 25-30 mile I'd get in it and they didn't have a chance. Run 100 mph in low gear with no problem. They'd be changing gears two times to my one. They'd be done dealing and I'd be truckin'. No dead steel racin'. Grab an Go. I'd come out of low gear about 95 mph and then I'd be in front and from then on it was history they'd look at the ass end of this car. "

"Every time I got outrun I'd trade. I wouldn't want to drive something around town that somebody had outrun. That'd been embarrassing back in them days."

"Ain't nobody ever outrun us. King of the mountain"

"I'd pull up alongside someone doing 70 in low gear and drop the clutch. They'd land on the median or a ditch they were so scared. I'd put 'em over in the median."

28 years since he's raced it. The last race he had was with a motorcycle. A guy had run it down from Ohio. he outrun that motorcycle like "he was tied". Ronnie got his money and soon after, he blew the clutch and soon after that, he quit drinkin'.

First time wife (not at the time) got in it, they'd been drinking and they were heading down I-4 Orlando about 170 and there were 2 cars in front of them and about that time, the one behind decided to pass and threw him into the ditch and she was on the floorboard. "She says I throwed her to the floorboard but I think she was scared to death."

Ronnie: "Pretty fast in 3rd gear. We were just getting ready to roll then."

wife: "That's what I thought"

Thoughts on Joyner and L88:

Ronnie Joyner is the last of an aging breed; the viral machismo from the golden age of muscle cars. The cars Ronnie drove were inspired works of art and uniquely American. These cars left their mark on our collective psyche and the cars like he raced and that raced him currently litter the finest classic car collections in the world but their rise to glory is less auspicious following backroads and boring long stretches of US highways.

Original gearheads, like Ronnie, drove the muscle cars defying traffic laws and racing for pinks or other bounty. Regular Joe's sat in their car's cockpit and waited. They waited for the next challenge. If they won, it was onto the next race. If they lost, it was onto the next car. Some didn't wait, some hunted their prey and the next rush at 200 mph. These men were bounty hunters in every sense of the word. Ronnie traveled up and down the southeastern corridor in his L88 Corvette looking for a sucker to take the bait. He would oblige any rival and take their money gladly.

Late night races and bridge to bridge challenges were reason number one original motors and documentation are now the holy grail for the contemporary class of car collectors. So unattainable, in fact, that a multimillion dollar black market of bogus paperwork infects the collector car world. Out of necessity, an entire cottage industry of car scholars have come of age. They can discern the pedigree of a certain car with its traces of DNA and stake their reputation on it. Ronnie's L88 has it all but the piece of paper from the factory that very well may have been lost when Ronnie flew the L88 off the railcar that delivered it. With the lack of paperwork it only makes the Barn Found L88 more interesting... not any less real. Corvette scholars, restorers, and judges have been duly impressed with the originality and the spot on accuracy no modern machine shop or documentation lackey could duplicate.

The 1968 L88 is a car collector's dream. It has it all. Rarity in production, heavy on horse power, light on options, and built when muscle trumped any sense of safety. Ronnie's L88 was delivered two months into the 1969 production year and was driven "wide open" off the railcar. Ronnie was a true grifter. He'd lull his opponents into a false sense of security with an engine rated lower in his L88 and then pass them like they were tied. The only sure bet was on Joyner's L88. Years of street racing, gun play, and some late night antics involving whiskey and a buddy's paint shop assured that this Corvette would be legend before being put out to pasture with the other restored thoroughbreds of the day.

We'll really miss the ribbons though...